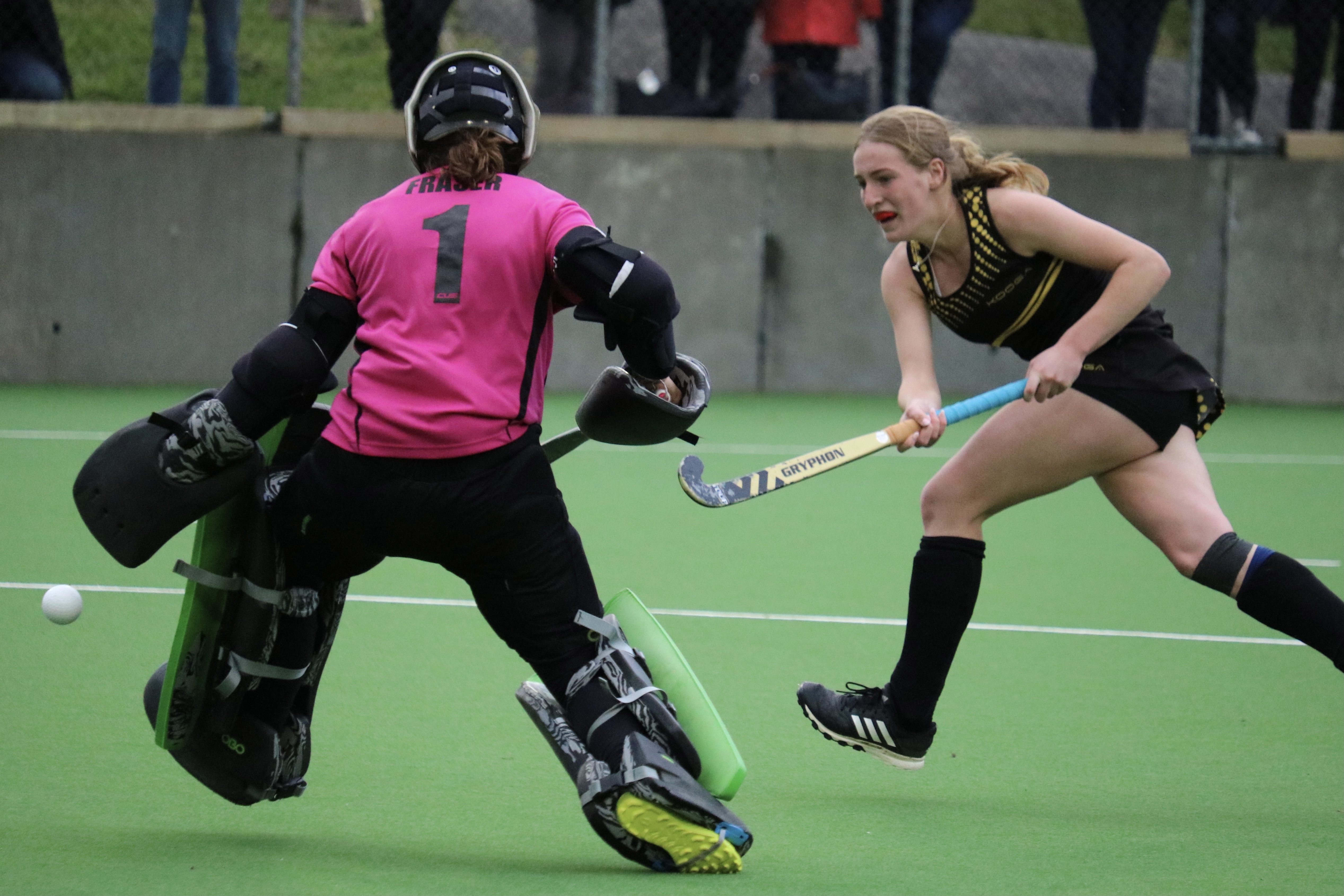 Having lost only two games all season and those back to back in April, Dalefield defended their title on Saturday with a drama-filled Final against Harbour City on Cello NHS 1.  In sunny conditions Dalefield were first on the board after just 10 minutes when a reverse stick shot from Maddie Taylor clattered off the goal-keeper and Mandy Yeo knocked the loose ball over the line.  Harbour City replied strongly and honours were even from then on, with the teams sharing possession but unable to beat their opponents’ defence.

As excitement increased in the final quarter Dalefield missed a couple of chances, then following a last-ditch Harbour raid Kelsey Stevens slapped the bobbling ball into the Dalefield goal with 58 seconds showing on the clock.  With no time for another score the Final became the second in a row to be decided by shoot-outs.  Dalefield made no race of it, their first three players all scoring while Harbour’s three attempts were blocked by impressive Dalefield goal-keeper Amy Rossiter-Stead.

Toa snatched fifth place with a hard-fought victory over Karori to finish their up-and-down season on a definite high.

Harbour City beat Hutt United for the third time in 2021 to take the Premier 1 title they missed out on last year.  They were 2-0 in the first quarter, played in cold, driving rain after twice scoring from penalty corners.  The rain stopped but it remained cold as Harbour maintained pressure on the Hutt Valley side with hard running and sure tackling.  Hutt United were eventually able to create opportunities from penalty corners but Harbour kept them at bay.  With just a minute and a half to go Hutt United’s former Dunedin Albion striker Aarie Verwey was successful with a drag-flick, but there was no time for another.

Indians beat Dalefield by a surprisingly large margin on McDonald’s Newtown NHS 2 to claim third place ahead of the Wairarapa-based side.  Indians were a goal up at half-time before a last quarter blitz saw them win at a canter.

Victoria gained revenge over Northern United for their earlier defeat, but had to work hard against a much-improved Northern side.

Tawa Titans had the bye.

Normal play resumed on Sunday with competition leaders Hutt United having an important win over challengers Harbour City on Cello NHS 1 and Victoria 2 being held to a draw by Upper Hutt in the early game.  Victoria 3 suffered their second loss in four days, going down to a resurgent Karori, while at Paraparaumu Kapiti 2 continued their dominance over Kapiti 1.

Runaway leaders Hutt United eventually got the better of third placed Harbour City in a goal-fest in the early game on McDonald’s Newtown NHS 2.  Second placed Upper Hutt had edged out Victoria in the earlier game, while Northern United and Karori could not be separated on the table or the turf.

The top three teams all won with Tawa Titans trouncing Naenae on McDonald’s Newtown NHS 2, Hutt United scraping past Victoria in the late game and Kapiti triumphing over Northern United on Cello NHS 1.  Indians’ success at Fraser Park moved them into sixth place ahead of Upper Hutt.

Kapiti maintained their lead with a solid victory over Hutt United on Mazengarb Reserve and Tawa Titans kept up the pressure with the tightest of wins over Victoria 4.on McDonald’s Newtown NHS 2.  Victoria 3 won equally narrowly over Indians on NHS 3, while on the same turf Harbour City cracked double figures in their drubbing of Northern United.